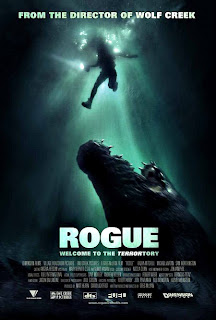 Okay, I know my taste in film tends to lean arty, somewhat obscure, and generally unpleasant (i.e. see recent Lars Von Trier post) , however I'm now going to rave about a  film involving a giant rampaging "Rogue" crocodile ( okay so its arty, somewhat obscure and generally unpleasant as well but c'mon!). Wolf Creek director Greg McLean's little seen recent follow-up film was buried by the studio under somewhat dubious circumstances involving an executive changing of the guard over at the Miramax/Dimensions/Weinstein Group whatever they are calling themselves these days . The film was only give limited distribution (10 cities) in the States this past spring after being completed a year previous and while the concept of the film matched with it's dumping so quickly to dvd one would assume it's typical creature feature schlock.
You'd be wrong.
The film (which stars Radha Mitchell as a bush guide and Michael Vartan, an American travel writer) is gorgeously lensed by late cinematographer Will Gibson. Gibson tragically took his own life not long after the film was completed after a life long battle with bipolar disorder. The film , like its predecessor also shot by Gibson, Wolf Creek makes stunning use of atmosphere out of the rugged and majestic Australian Outback landscape. While  went for intimacy and up close realism to the point it was nearly unbearable to watch the events unfold Rogue is far more epic. The sweeping vistas and arial shots of wild life and the rivers of the Northern Territory set the remoteness immediately  the danger is palpable but the beauty remains alluring. Taking a cure from Alien and Jaws before it Rogue uses a less is more approach to their killer croc.  Instead of a CGI beast that moves at lighting speed and dispatches nameless victims we get nearly 40 minutes of build up, what follows is such an unexpected and visceral attack that it leaves the audience breathless and nearly as rattled as the members of a river tour cruise who accidentally become the targets of this rampaging reptile. It's a smart, character driven survival horror film that's well acted, well made and riveting.  It's a sad fate for this film to fly under the radar but it's a brilliant continuation of McLean's gift as a director, one who I'm sure we will hear great things from  in years to come.
the director strives to rescue the creature feature/animal attacks format from the B-movie genre, and with Rogue he succeeds in crafting a terrifyingly realist depiction of man versus wild that was loosely inspired by the real life crocodile Sweetheart who terrorized the Sweetwater Bog in the 1970s attacking fishing boats and humans for months.
A friendly reminder, as big as the croc looks in the film  (7.2 meters) they get bigger in th wild....