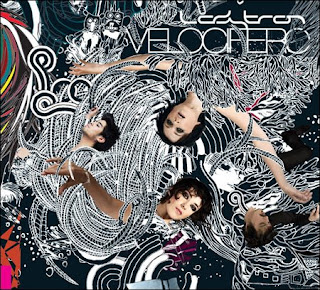 Ladytron's new lp Velocifero continues what they started with the beguiling and brilliant The Witching Hour taking the "electro-clash" sound (electro-clash sounds so readymade retro doesn't it?) and adds more Post-Punk guitar flourishes and makes something quite singular. This time around the beats are a bit more propulsive over all and the whole affair comes off more late-afternoon than late-night. Tracks like Ghosts and They Gave you a heart , They gave you a name leap from the speakers with vaguely anthemaic choruses and a 80's sing along quality. Like The Witching Hour its still a little haunted around the edges but they seem content in their blackness. The album is rockier and and yet has more touches of Magic & Light than it's predecessor . The dusky goth dance off quality to the whole affair begins with the opening track Black Cat sung in Bulgarian and permeates each number. It's a fine record made by a surprisingly resilient band. Hmm, black clad kids from Liverpool (among other places) make a great record...
Recorded n Paris the album gives in to the shoegaze and buries the vocals beneath murky synth waves and guitar distortion much like previous outings but here the aggressiveness of it all is a surprising change, that has only been hinted at in the past.
Posted by Andrew klaus-Vineyard at Saturday, May 31, 2008