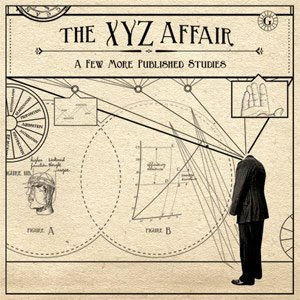 After the better part of a decade where nearly every skinny boy with a guitar was pouring out his diary pages on to the air waves with the confessional finesse of a roller-skating mule it's refreshing to hear a band like Brooklyn NY's The XYZ Affair.A sunny pop sound that actually POPS from the speakers recalling the Rentals-by-way-of-a-Broadway show. Singer and principal songwriter Alex Feder's literate lyrics snap to attention and the intricacies of his melodies and vocal performance are very much in the vain of former Shudder  To Think front man Craig Wedren. Like Wedren, Feder's falsetto is nearly as nibble as the guitar play between Feder and band mates Russ Maschmeyer and Chris Bonner, who along with drummer Sam Rockwell keep things nailed down in perfect time. All four sing-shout in unison raising the anthematic bar and creating the sound of a socialist protest march for love. Most impressive is the production of this self release. The mixing and mastering are superb as is the recording. The harmonies sing and float perfectly in the track.  Lead single All My Friends (with its Archers of Loaf style guitar work) is destined for heavy rotation on car trips this spring as is the soaring The Professional
.

side note- The XYZ Affair completely upstaged British Sea Power, whom they opened for, at a recent show at the Doug Fir Lounge in Portland, OR.
Posted by Andrew klaus-Vineyard at Wednesday, March 05, 2008