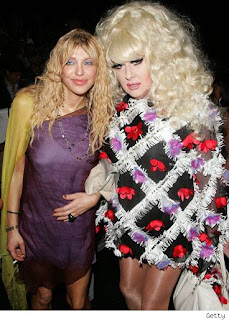 So Courtney Love hasn't quite officially launched her come-back campain but she's been creeping up lately offering up cautionairy tales of drug woes, and the healing of yoga and Buddhism. I'm seriously not going to trash talk her, call me a glutton for punishment but I hope she's able to pull it together.

Dear Amy Winehouse, when COURTNEY-FUCKING-LOVE tells you to lay off the drugs, c'mon girl it's time to put down the pipe.

And you , the so-called "Butterscotch Stallion" Smashed-faced Owen Wilson, just count yourself lucky that through the sheer luck of Wes Anderson you've had a career at all. You've spent the better part of a decade playing the same character over and again. Count yourself lucky to have even chatted up Kate Hudson, shrug , and move on. But kudos for an honest -to-god suicide attempt and non of this namby-pamby look-at me-mom bullshit, unlike Britney Spears in "rehab" drawing pentagrams on her head writing 666 and claiming to be the antichrist. (more on her latter)

Ok... Post MTV Video Music Awards, well lets say I am no longer in touch with the "MTV generation". Is it ironic that you give awards to videos when you don't play them? Just asking.

Britney. STOP!!!! Take a deep breath. You're a mom and opening the award show you kinda looked like one. Groggy, slightly drunk young southern white trash moms lip-synching pop music and wandering around in their underwear. It wasn't lackluster, it was sad. Get help sweetheart. Get some rest. Don't perform when you can't and honey, you CAN'T right now.
Posted by Andrew klaus-Vineyard at Tuesday, September 11, 2007

That picture sums up, perfectly, why I don't let my daughter play with Bratz dolls.